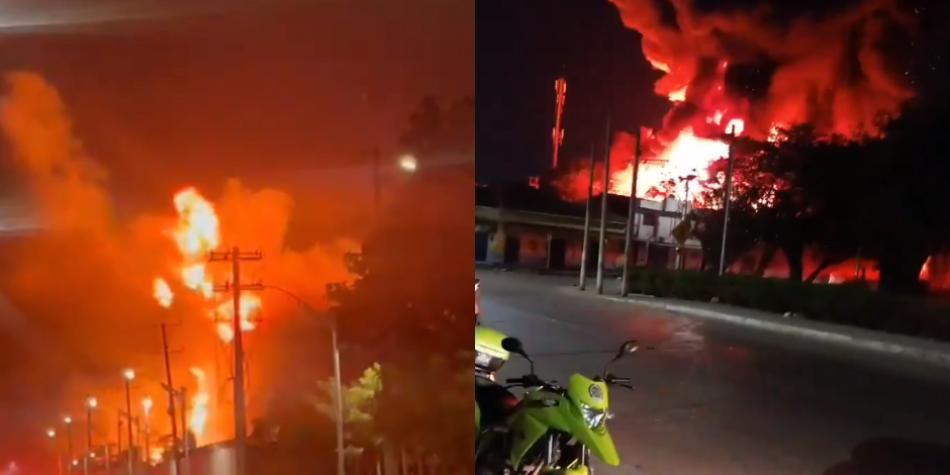 …In the early hours of this December 21, authorities reported a serious fire in the city of Barranquilla. The event occurred specifically in the port of Compás, in a hydrocarbon company.

Everything seems to indicate that one of the storage tanks exploded. According to several users on social networks, 9 machines of the Barranquilla Fire Brigade are attending the conflagration.

Several people, including two firefighters who were injure,  taken to hospital for treatment. The authorities report that one of the affected uniformed personnel died in hospital.

Voracious fire in Barranquilla cause by explosion that reache oil tanks.

As can be seen in the videos poste on social networks, the flames reach. A great height and are pushe by the winds in the area, making the work of firefighters difficult.

At the moment, the supply in the sector of Via 40 near the Compas dock, which is mostly industrial and not residential, is reporte to be affecte.

A serious fire in Barranquilla unleashed an emergency early Wednesday morning, December 21, in the industrial zone located on Route 40 in the capital of Atlántico. Six fire engines were neede to control the strong flames that reached some hydrocarbon tanks.

Serious bus accident in Nariño: “It got out of control, I tried to control it and nothing”.
According to preliminary information, the fire in Barranquilla originated with an outbreak that then got out of control. When the firefighters arrive there was an explosion and two of them were injure and had to be taken to medical centres.

The emergency agencies requested help from other fire brigades in the metropolitan area of Barranquilla because they were unable to cope with the situation.

The company where the fire broke out in Barranquilla provides logistics services to the energy and hydrocarbon sector.

The authorities of the capital of Atlántico closed the nearby roads and also sent ambulances to attend to possible affected people in the community. Many employees were unable to reach their jobs in time.