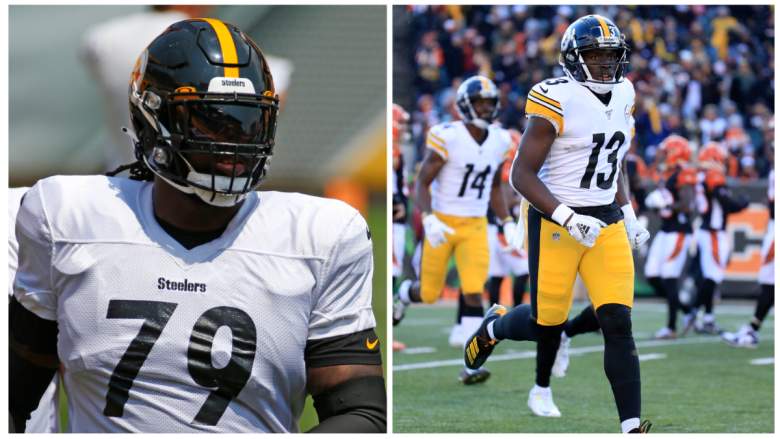 The Arizona Cardinals worked out a half-dozen players on Monday, including former Pittsburgh Steelers guard Rashaad Coward. If Coward ends up signing with Arizona, he would become part of an offense that includes former Steelers running back James Conner and former Steelers offensive tackle Kelvin Beachum.

Rashaad Coward originally joined the Steelers in March 2021; interestingly, it was an online gamer/Reddit user/Packers fan who broke the news of the signing. Coward worked with Pittsburgh’s first-team offensive line throughout last year’s offseason program and into training camp. But he was part of the team’s final round of roster cuts in late August before resigning in early September.

He proceeded to appear in four games before the Steelers released him in mid-October, and nearly all of his action came on special teams.

To date, the 27-year-old Old Dominion product has appeared in 34 career games, including 15 starts for the Chicago Bears in 2019-20.

Meanwhile, the Dallas Cowboys already have a diagnosis on the injury suffered by former Steelers wide receiver James Washington in training camp on Monday, Aug. 1.

According to Todd Archer, who covers the Cowboys for ESPN NFL Nation, Washington suffered a fractured fifth metatarsal when cornerback Trevon Diggs landed on his right foot at the end of a long pass play.

“He is scheduled to undergo surgery Tuesday in Dallas,” Archer reports and will be unavailable for 6 to 10 weeks.

The Cowboys will be without WR James Washington for 6 to 10 weeks because of a fractured right foot he suffered Monday, according to multiple sources. He is scheduled to undergo surgery Tuesday in Dallas.

In mid-March, the Cowboys signed Washington to a one-year contract that counts $1,047,500 against the team’s salary cap.

The Abilene, Texas, native spent the first four years of his career in Pittsburgh after the Steelers selected him in the second round in 2018 out of Oklahoma State.

So far he has recorded 114 career receptions for 1,629 yards and 11 touchdowns, an average of 14.3 yards per reception. However, he has never recorded a catch percentage higher than 55%, according to Pro Football Reference.

On Monday, we learned that the Steelers tried out a trio of wide receivers before signing former Detroit Lions wide receiver Javon McKinley. According to the NFL’s daily personnel notice, the other two were Juwan Green (who has spent time on the Falcons and Lions practice squads) and DJ Montgomery, a former undrafted free agent out of Austin Peay who appeared in three games and caught three. passes for the New York Jets last season.

The Steelers also coached quarterback Vad Lee, who finished his college career at James Madison in 2014-15 after spending two years as the starting quarterback at Georgia Tech. Lee, 29, has played in the CFL (with the Saskatchewan Roughriders in 2016) and most recently was with the Pittsburgh Maulers of the USFL, having been signed mid-season after the Maulers started 0-4 and elected to release quarterback Josh. Love.