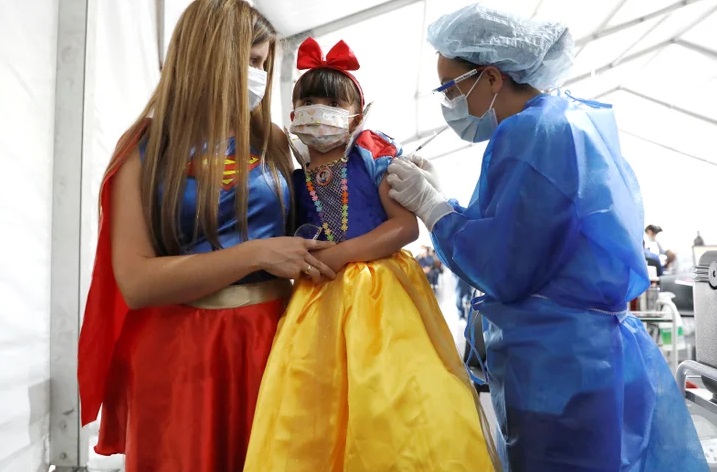 The Mayor’s Office of Bogota informed that this Saturday, July 30, it will carry out a ‘Great Vaccination Day’ against more than 20 diseases free of charge, through which it seeks to reduce the risk of possible contagion of covid-19 or diseases such as diphtheria, measles or polio which, despite not registering cases in the country, have been identified in the United States, Venezuela, and Brazil.

The Ministry of Health announced that more than 200 points will be set up in different locations of the capital and another 36 located in shopping centers or areas of high influx of people, where vaccines will be offered against influenza, hepatitis A and B, meningeal tuberculosis, pertussis, tetanus, rotavirus diarrhea, pneumococcus, mumps, rubella, yellow fever, among others.

“The Health entity, clarified that currently 15,526 babies under 1-year-old, 19,267 girls and boys of one year, 11,849 of five years and 376,861 children between 1 and 10 years, are pending to start or complete their vaccination schedule, which generates a high risk of having re-emergence of diseases that are currently controlled,” said the district administration.

At the same time, he explained that this scheme also includes the vaccine against covid-19, which is already available from the age of three, reason why he reiterated his call for the application of the booster doses to avoid death in case of contracting the virus or becoming seriously ill, likewise, he noted that the second booster has already been authorized for people over 50 years of age or people between 18 and 49 who have risk factors.

Likewise, the Ministry of Health pointed out that the PCV13 pneumococcal vaccine is being applied to newborns, which protects against 13 serotypes of the bacteria, and also against the human papillomavirus (HPV), which prevents cervical cancer and has two free doses for children between 9 and 17 years of age.

During this day the teams will visit the neighborhoods of San Bernardino, in Bosa; Chicó Sur, in Usme; Unir, in Engativá; Isla del Sol, in Tunjuelito; and El Perdomo in Ciudad Bolívar; which seeks to protect minors against different diseases; however, the local administration clarified that if the dose against the coronavirus was applied, they must wait 14 days to go for the vaccines of the permanent scheme.

“Measles is a highly contagious viral disease that affects mostly children and can cause severe health problems, including severe diarrhea, ear infections, blindness, pneumonia and encephalitis (inflammation of the brain). Some of these complications can lead to death. Poliomyelitis is a contagious viral disease which, in its most severe form, causes nerve damage that can even lead to paralysis, difficulty breathing, or death,” the Secretariat indicated.

Finally, it pointed out that diphtheria is a bacterial infection that usually affects the mucous membranes of the nose and throat, and said that in advanced stages it can damage vital organs such as the kidneys, heart and nervous system.