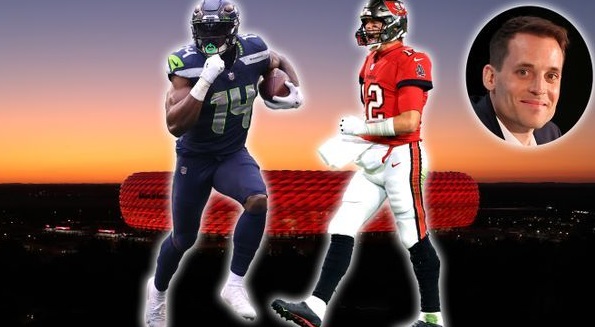 Alexander Stainforth, the NFL Germany game between the Tampa Bay Buccaneers and the Seattle Seahawks at the Allianz Arena in Munich next November sold out in just a few minutes, with almost one million fans waiting in the virtual ticket queue for their chance.

Alejandro Steinforth: Based on the approximately 600,000 registrations for this pre-sale over the past few weeks, we can already guess a bit ahead of time. However, at its peak, there were about 800,000 people in the virtual queue at the same time. ‘Ticketmaster’ later informed us that they might have sold around three million tickets. There would be such demand all over the world, whether at sporting events or concerts, otherwise only at the Super Bowl. Thus, this pre-sale of the NFL Germany game has once again exceeded all expectations.

Especially about the mechanics and process of ticket sales, which assigned you a place in the virtual queue via a random generator, caused annoyance and discussions among some NFL fans. How do you rate the advance ticket sales afterward?

Stainforth: First of all, we’re especially pleased that the box office ran smoothly. With such a rush, that’s an extreme technical challenge. But of course, there’s always going to be disappointed with a presale like that, because they didn’t have the opportunity to buy tickets at all. For us, for our presale, we were inspired by what the lessons have been from the last 15 years of presales for the NFL London Games and what has worked best, and that was the mechanics that we have now also used for us in Germany … . Unfortunately, we couldn’t change anything about the long virtual queues. It’s more a sign of how many people were waiting. However, we read the comments calmly and will analyze them together.

ran: In retrospect, to what extent should less than a maximum of six ticket purchases per person be allowed?

Stainforth: For example, if we had reduced the number of tickets to only two tickets per person, we would have received the same negative feedback from families or groups of friends, who would then have said they couldn’t come to the game together. Two tickets would not have been enough. But it is clear that there are also divergent opinions on this.

ran: Many tickets ended up on eBay for horrendous prices just minutes after they went on sale. How did you perceive that? And how is the NFL fighting the black market?

Stainforth: This is actually a question that we discussed a lot. In the end, we finally decided not to do it. Why? Because we are mindful of the issue of waiting times for admission due to the large number of fans we are expecting in Munich. Under certain circumstances, this can lead to a lot of frustration, because we will have relatively long waiting times anyway because we work at the entrances with metal detectors like at the airport. So everything takes time and that’s why we didn’t want to maximize the waiting time. That would have slowed down the processes again. So there are definitely reasons why it is the way it is now. As mentioned, we’ve learned a lot from 15 years of advanced sales in London.

ran: What lessons are you learning from presales for the NFL Deutschland game?

Stainforth: We recorded all the feedback we received and will analyze everything afterward. We will certainly have to continue to communicate clearly and transparently. But: We also have to be aware that this NFL-Germany game is possibly the biggest sporting event in our country in terms of ticket demand that has occurred in recent decades. In this sense, it is always easy to say in retrospect that it would have been better one way or the other. It is simply a very complex matter to try to fill a stadium in a short time given the enormous demand.

ran: Will there perhaps be a second pre-sale phase? So, can you give some hope to everyone who hasn’t received anything so far?

Stainforth: But it always happens that some tickets go unclaimed for various reasons. For this reason, it may well be that these returns will go on sale again. And then there will be the aforementioned official secondary market through ‘Ticketmaster’, where fans can sell tickets for fans at normal prices. However, we do not expect thousands of tickets to be available either. In addition, there will also be another opportunity to win tickets through our partner ‘DKB’. ‘DKB’ would like to bring the NFL Germany game even closer to the fans and is therefore planning various activities in this regard. But that is complete until then in its sovereignty. They’re also the phones don’t ring because the fans also call there and ask for tickets (laughs). So these three options are not there. ch: Returns, secondary market, and ticket campaigns of our partners.”