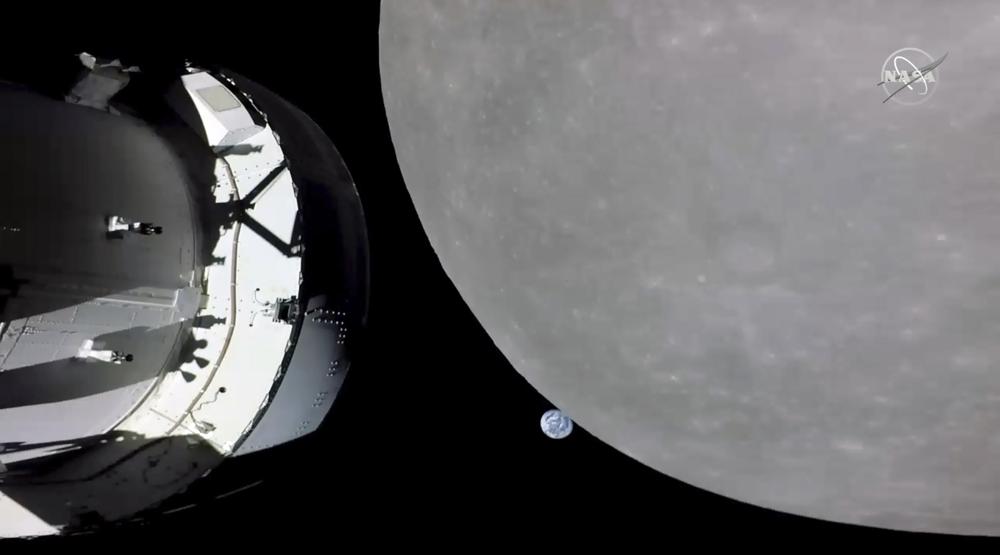 NASA’s Orion capsule reache the vicinity of the moon on Monday. Flew over the dark side of the satellite to approach the lunar surface as it prepares to be place. Unprecedente orbit with test dummies instea of astronauts.

It is the first time a capsule has visited the moon since NASA Apollo programme 50 years ago. Represents a huge milestone in the $4.1 billion test flight that began last Wednesday.

The images of the huge moon and our blue planet more than 370,000 NASA. kilometres away amaze workers at Houston’s Johnson Space Center, where Mission Control is located, according to flight director Judd Frieling. Even the flight controllers themselves were “extremely shocke.

NASA’s Orion capsule passes dark side of the Moon

The 130-kilometre (81-mile) approach occurred while the capsule and its three dummies were on the dark side of the moon. Because of the lack of communications for half an hour, flight controls in Houston did not know if a vital engine ignition had gone well until the capsule came out the other side. The capsule’s cameras sent back a picture of the Earth, a tiny blue dot in the middle of the darkness.

The capsule passed 8,000 km/h (5,000 mph) while regaining radio contact, NASA reporte. Less than half an hour later, Orion passed over Tranquility Base, where Neil Armstrong and Buzz Aldrin landed on 20 July 1969. There were no pictures because the flight occurred in darkness, but the directors promised to try to take pictures on the return flyby in a couple of weeks.

Orion needed gravity assistance to achieve sufficient velocity to enter the asymmetric lunar orbit. A new engine burn will be performed to place the capsule in that orbit on Friday.

The capsule will spend about a week in lunar orbit before returning to Earth. The capsule is schedule to land in the Pacific on 11 December.

Orion does not have a lunar descent vehicle, and will not land on the moon until NASA astronauts attempt it in 2025 with SpaceX’s Starship spacecraft. Astronauts will board Orion to fly over the moon possibly in 2024.

Mission manager Mike Sarafin was please with the mission’s progress, rating it a “cautiously optimistic 10” so far.

The Space Launch System rocket – the most powerful NASA has ever built – exceeded expectations at launch, Sarafin told reporters. He added that teams are grappling with two problems that require workarounds. One with the stellar navigation trackers and another in the propulsion system.

However, the 98-metre (322-foot) rocket cause more damage than expecte to the launch pad at Kennedy Space Centre. The force of 4 million kilograms (8.8 million pounds) of liftoff thrust was such. That it dislodge the elevator doors, which were rendered unusable.

Sarafin said the damage to the pad will be repaire in plenty of time before the next launch.

The Associated Press Health and Science Department is supporte by the Howard Hughes Medical Institute’s Department of Science Education. The AP is solely responsible for all content.