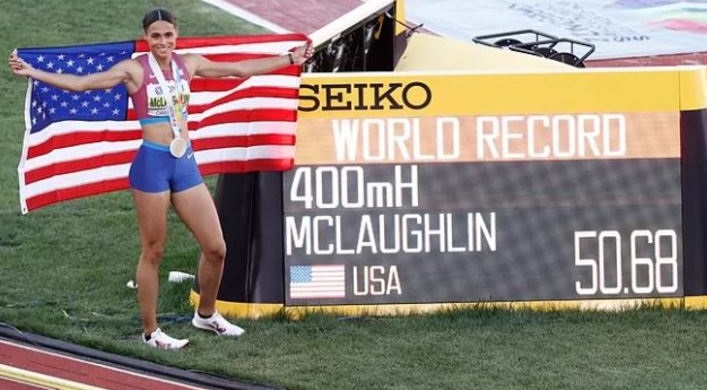 Sydney McLaughlin could not fight for the gold in the 400m hurdles at the 2014 World U20 Championships in Eugene. She was qualified but could not compete in that championship because the World Athletics rules prevented her from doing so: she was only 14 years old, too young for the category.

Eight years later she has finally reigned at Hayward Field, a venue she knows like the back of her hand. It is no coincidence that three of his four world records came on this track.

Perhaps that is why he was the focus of all eyes today, waiting for a first record that would brighten up a World Cup orphaned of records beyond the occasional memorable moment.

McLaughlin knew it and did not disappoint. What’s more, she exceeded expectations because she has taken her event, the 400m hurdles, to uncharted territory. The American came out of heels like a rocket and within 150 meters had already taken the compensation to Dalilah Muhammad, the woman who had defeated her in Doha 2019 with another world record. It was her last setback to date at the distance.

Her progression was unstoppable and by the passing of the eighth hurdle, with the entire home straight ahead of her, she had amassed an almost insulting lead over Dutchwoman Femke Bol, the woman called to challenge her reign, and Muhammad herself.

The applause was loud because the whole stadium was aware that they were witnessing a memorable moment, something that was confirmed by the electronic display when McLaughlin crossed the finish line 50.68, 73 hundredths faster than her previous world record, achieved here on June 25 at the US trials.

The ‘martianada’ of the golden girl of ‘Yankee’ athletics, who adores Allyson Felix, was of such a caliber that she surpassed Bol, who with 52.27 achieved the best mark in history for a world silver medal, by one and a half seconds. The podium was completed by Muhammad (53.13), also the fastest bronze medalist of all the championships.

The effort had been huge, inhuman – she would have been seventh in the 400m final – equivalent to that of Karsten Warholm in the 400m hurdles at the Tokyo Games, when she went under 46 seconds, and the toll was not long in coming. For several minutes, McLaughlin remained seated on the tartan, almost unable to move and with her face half gone.

Once her figure was back to normal, she approached the marker and took the usual photo with the new record, but soon after she sat down again, exhausted and with little desire to celebrate. Lactate.

A gold mine
Married since May of this year to a former NFL player, McLaughlin is the daughter and sister of athletes, although none of them with comparable talent.

Her father, Willie McLaughlin, a semi-finalist in the 400 meters at the 1984 trials, was clear from the start: “All our children are quite talented, but Sydney is a bit special. We saw it coming. It was only a matter of time,” he said when the child was only 14 years old and was already astounding the athletic world with his prowess.

After a year at the University of Kentucky, he turned pro in 2018, signing a contract with New Balance at $1.5 million a year. What’s more, his representative usually works with Hollywood stars and not with other athletes. And it was already a gold mine for all to see.

Now she has confirmed all the predictions with a gold medal and a record that crowns her as the undisputed queen of this World Cup. What McLaughlin has in store for us in the future, nobody knows, but it no longer seems impossible to break the 50-second barrier.