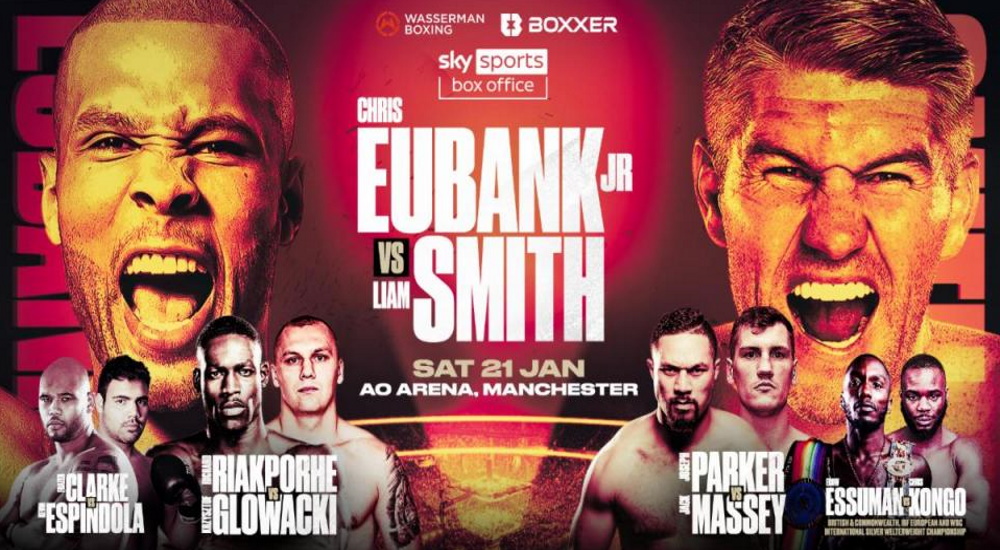 After months of verbal exchanges, Liam Smith is finally set to take the ring against Chris Eubank Jr tomorrow night.

With both men targeting future world title fights, defeat for either could prove terminal to their boxing careers. Smith heads into this pay-per-view clash in the form of his life following wins over Jesse Vargas, Anthony Fowler, Roberto Garcia and most recently Hassan Mwakinyo.

While Eubank Jr is a man whose family name needs no introduction at all. Son of legendary former world champion Chris Eubank, the 33-year-old has successfully carved out his own reputation in the sport.

Elsewhere on a packed card in Manchester, Richard Riakporhe, Joseph Parker, Frazer Clarke and Frankie Stringer will all feature on what promises to be an unforgettable start to 2023. And below is everything you need to know about a sizzling Saturday night of boxing.

When and where is Chris Eubank Jr vs Liam Smith?
The fight takes place on Saturday, January 21 at the AO Arena in Manchester. Tickets for the fight have officially sold out.

How to watch Chris Eubank Jr vs Liam Smith

Who is fighting on the Chris Eubank Jr vs Liam Smith undercard?
Acting as chief support after 9pm will be cruiserweight Richard Riakporhe as he takes on Krzysztof Glowacki. From 8.15pm, Ekow Essuman fight Chris Kongo.

Having suffered the first knockout defeat of his career to Joe Joyce last time out, Joseph Parker will be aiming to bounce back when he meets Jack Massey from 7.30pm. Olympic super-heavyweight bronze medallist Frazer Clarke will also contest a six-round meeting with Kevin Espindola after 7pm.

The action gets under way on Sky Sports Box Office from 6pm. Scott Forrest will face with Amine Boucetta first before Matty Harris takes on Jiri Surmanj, while Frankie Stringer is also on the undercard.