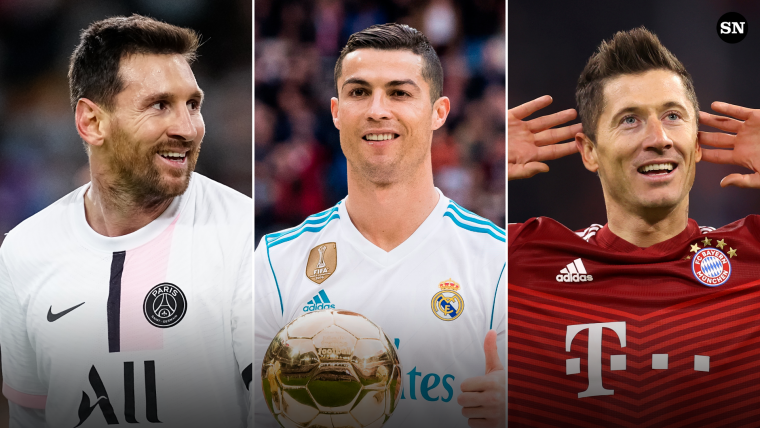 The UEFA Champions League is considered the world’s preeminent club tournament, and players can become legends with great performances in Europe’s top competition.

And since scoring goals is considere the most glamorous skill in football, those who find the back of the net consistently can earn legendary status in the game.

Stars of the past, present, and future clash in the Champions League record books, with their goalscoring marks considered among the most coveted records of all time. Today, talents like Erling Haaland the Kylian Mbappe look like they have what it takes to match the exploits of Cristiano Ronaldo and Lionel Messi, who have left their indelible mark on Europe’s elite tournament.

The Sporting News brings you the top names and numbers for the goalscoring legends of all-time in European play. The lists below combine goalscoring from both iterations of UEFA’s top competition: the European Cup (beginning in 1955) and the Champions League (since 1992/93).

Record for most Champions League goals in a season?

His record from the 2013/14 season still stands after nearly a decade, scoring 17 goals across 11 matches and 993 minutes as Real Madrid won the title during that campaign. Ronaldo scored in every single match he appeared in except one, going 73 goal-less minutes in the first leg of their semifinal match against Bayern.

He would nearly repeat that incredible feat just two seasons later, bagging 16 goals as Madrid yet again won the title. He scored hat-tricks against Shakhtar Donetsk and Wolfsburg, plus a four-goal stunner against Malmo in the group stage. That year, Ronaldo would manage ‘just’ five goals in the knockout stage, doing most of the work early on in a soft group stage.

Ironically, in both seasons, Real Madrid beat Atletico Madrid in the Champions League final, needing extra-time on one occasion, and a penalty-kick shootout in the other.

Lionel Messi’s best season ranks him sixth, bagging 14 goals in the 2011/12 season as Barcelona reached the semifinals before falling to Chelsea. Others on the list from football’s earlier days include goal hawk Jose Altafini, German great Gerd ‘Der Bomber’ Muller, and Hungarian legend Ferenc Puskas, for whom FIFA’s Goal of the Season award is named.

What is the record for most Champions League goals all-time?

With consistent goalscoring numbers in European play season after season, it’s no surprise that Cristiano Ronaldo and Lionel Messi are atop the Champions League career goalscoring charts.

A wide gap exists below those two all-time greats and the duo chasing them: Robert Lewandowski (3rd) and Karim Benzema (4th).

The top non-active player is Raul with 71 goals, with Dutch striker Ruud van Nistelrooy 15 goals behind him.

Who has the most Champions League hat-tricks?

Cristiano Ronaldo and Lionel Messi are both tied atop the Champions League hat-trick list, with twice as many as anyone else in the history of the competition save Robert Lewandowski who’s just two behind.

Champions League hat-tricks as of September 13, 2022

Most goals scored in a Champions League match?

The only club to concede five Champions League goals by a single player twice is Cypriot side Omonia, which saw it happen both times in the 1970’s.