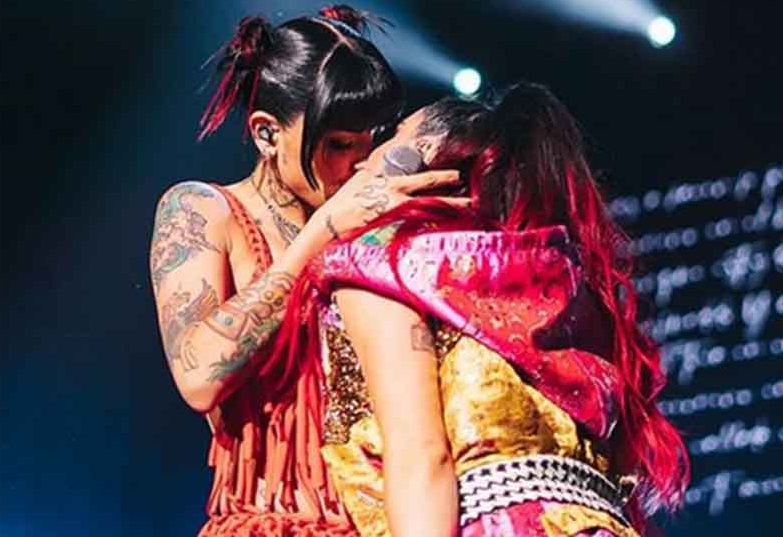 He kisses Lali Esposito in the middle of the concert. Cazzu

Mexico Agency
Chiapas Newspaper
Julieta Cazzuchelli, known as Cazzu, has given a lot to talk about after starting her romance with Cristian Nodal, because a few days after publicly declaring her love to the Mexican, now the Argentinean appeared during one of her concerts kissing her colleague Lali Esposito.
In the show offered at the Movistar Arena in Buenos Aires, Argentina as part of her Disciplina Tour, Esposito had as special guest Cazzu, who for the occasion chose a crimson red outfit consisting of crop top, crochet miniskirt and black boots.
However, while performing the song Ladrón, which they recorded together a couple of years ago, the artists surprised each other by kissing on the mouth while singing to show the affection and great friendship they have for each other.
Before the unexpected kiss, the audience filled with shouts and applause throughout the venue; however, in social networks the action also provoked some comments and criticisms.
“Who is copying who? Ridiculous”, “Lali will get herpes from being in those things”, “This is the fashion now”, “Well, lack of talent”, “What will Nodal’s grandmother say”, are some of the comments.
So far it is unknown what Christian’s reaction was, or if he was in the place, because since they began their relationship they have not separated, and even she accompanies him to all his concerts.
A week ago, Nodal and Cazzu attended an event in Argentina, being that the first time they appeared formally as a couple. In an interview, the artist talked about her relationship with the singer-songwriter, with whom she said she is madly in love.