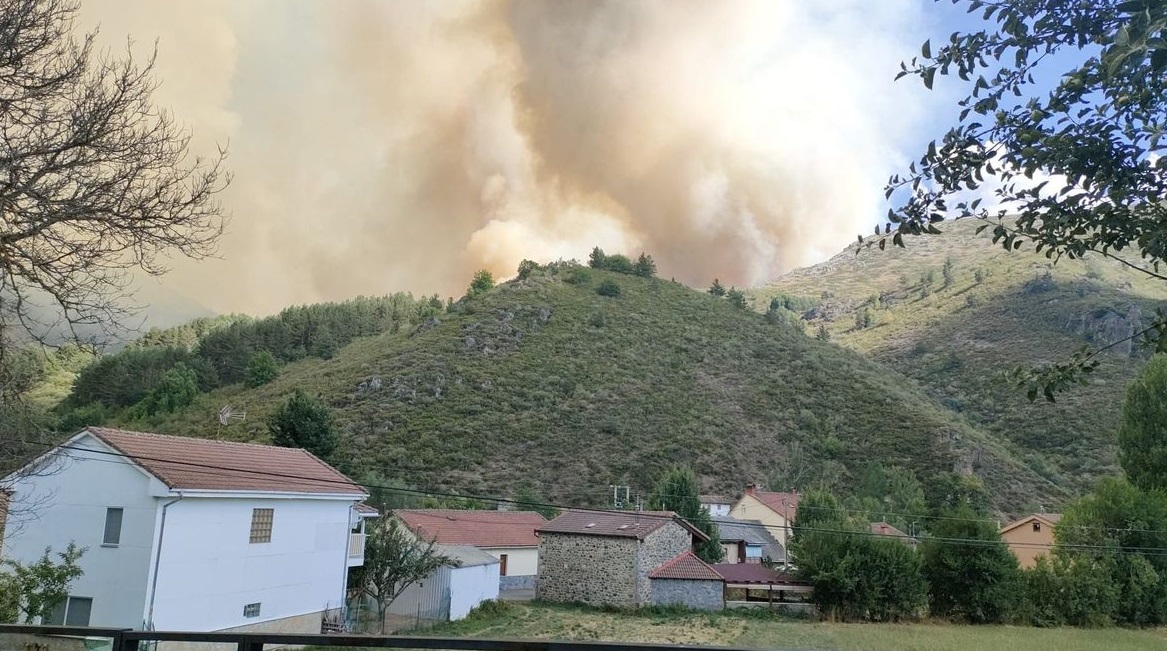 A fire that broke out this Sunday in Boca de Huérgano (León), which already affects more than 600 hectares, has gone to level 2 of danger (on a range of 0 to 3) due to the difficulty to control it and the arrival of smoke to municipalities near the outbreaks, although none have been evacuated. The area of Environment of the Junta de Castilla y León, which has requested support to the Military Emergency Unit (UME), has reported that this front “continues very active and advances”. In the south of the community, the fire of Santa Cruz (Ávila) has been controlled thanks to the precipitations fallen on Monday evening, which have allowed to dominate the last embers of a fire that had lost its greatest danger thanks to the extinguishing work.

One of the main dangers in the Leonese outbreaks is, as confirmed by the Environment, that “the rocky area with scrub contains a lot of fuel and the orography complicates the work of extinction”. In addition, the weather forecast predicts intense storms with a high probability of lightning and strong winds that may complicate the work of the brigades deployed. Thus, the heliborne units and seaplanes, which drop water from the sky at points that their colleagues in the firefighting trucks and ground crews cannot reach so easily, are gaining relevance. The proximity of the Riaño reservoir allows them to collect water comfortably to continue intervening from the sky.

Fire under control in Avila

The fire in Santa Cruz (Ávila), which started this Friday and has burned more than 1,000 hectares of the Gredos mountain range, has been practically extinguished and the authorities have allowed the approximately 25 people evicted from a housing development near the forest to return to their homes. Castilla y León is the Spanish community most affected by the flames this summer, with more than a third of the national hectares razed to the ground.

Pedro Bernardo and Lanzahíta, the towns of Avila that had experienced the fire most closely, have spent four days of concern and a lot of smoke generated by the different reactivations that have made the work of the firefighters difficult. These have insisted that the complex orography of these lands and the high temperatures were encouraging reproductions that prevented the ending of this forest fire. The rains, accompanied by an increase of the night humidity, have favored the advances and the operatives are now pending that the wind, very intense in the last dates, does not provoke new episodes of fire in those lands. The neighbors and the volunteer firemen who know these places have insisted on a constant of the fires of these months of heat: the lack of attention and care on the groves, with much fuel in the form of undergrowth, unleashes fronts very difficult to undertake on the part of the brigades. The first estimates point to the fact that it has been provoked.

In addition, the shifting winds make it necessary to act with special caution because it can lead to groups being caught up in fires that suddenly ignite. That happened to a firefighter a few weeks ago in Zamora, in the second fire in the Sierra de la Culebra. Between them, they devastated some 60,000 hectares and caused the death of both this professional and a shepherd who was caught with his flock. In these two cases, as in the rest of the fires in Castilla y León, firefighters have denounced the lack of human and material resources and poor working conditions and supplies.