It has been an interesting few years for Nick Young. The former NBA star known as “Swaggy P” will be going from the basketball court to the boxing ring on July 30, when he takes on Blueface. They will be fighting inside Cyrpto.com Arena.

The fight will be a part of the “No More Talk” boxing card presented by Social Gloves. The main event will see Austin McBroom take on AnEsonGib, with NFL stars Adrian Peterson and Leon Bell fighting one another.

Young, 37, was drafted by the Washington Wizards in the 2007 NBA Draft. He played with the team from 2007-2012 before being traded to the Los Angeles Clippers. After a quick stint with the 76ers, Young signed with the Lakers in 2013 spending four years with the team.

Young’s NBA career came to a close when he signed with the Nuggets in December 2018 and was waived just a couple of weeks later, appearing in just four games.

As far as how he sees a fight with Blueface going, Young is confident. Even with his lack of abilities in the ring, “Swaggy P” believes he has an edge over his opponent. He told TMZ he would beat him in the first round.

“He’s a rapper,” Young said. “They’ve got to be in the studio all night. You’ve got to drink, you’ve got to smoke. We don’t do that type of stuff.” 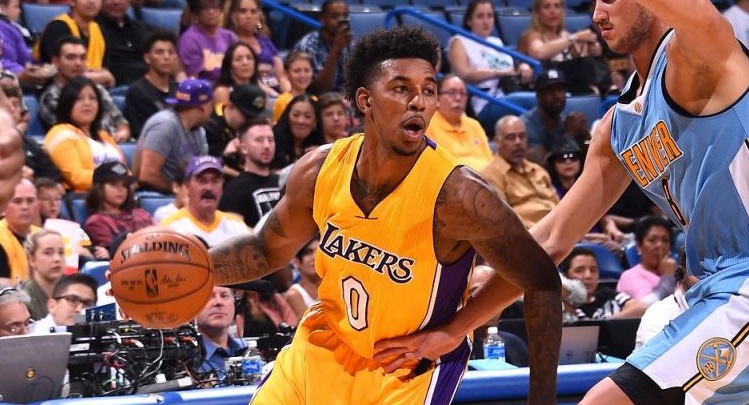 Born Johnathan Jamall Porter, Blueface is a rapper. The 25-year-old was born in Los Angeles and played football for Fayetteville State University. In 2017, he started rapping, and in 2018 he released “Famous Cryp.”

His most successful single to date was a remix of his song “Thotiana” in 2019, featuring Cardi B and YG. It ended up peaking at number 8 on the Billboard Hot 100. Blueface’s first studio album, “Find the Beat”, was released in 2020.

Nick Young’s net worth: How much does Young make?

Per Celebrity Net Worth, Nick Young has a net worth of about $25 million. While with the Lakers, Young was playing under a $21.5 million contract.

The fight purse for Nick Young vs. Blueface has yet to be released. The Sporting News will be providing updates as more information is revealed.

When is Austin McBroom vs. AnEsonGib?

Austin McBroom vs. AnEsonGib takes place on July 30. The prelims begin at 9 p.m. ET and the main card starts at 11 p.m. ET.

How to watch Austin McBroom vs. AnEsonGib

Fans can watch Social Gloves: No More Talk on SocialGloves.tv and all pay-per-view formats.

Austin McBroom vs. AnEsonGib PPV price: How much does the card cost?

You can purchase the event for $39.99 across all platforms.

How much do tickets for Austin McBroom vs. AnEsonGib cost?

Tickets for the event start at $55, per TicketSmarter.