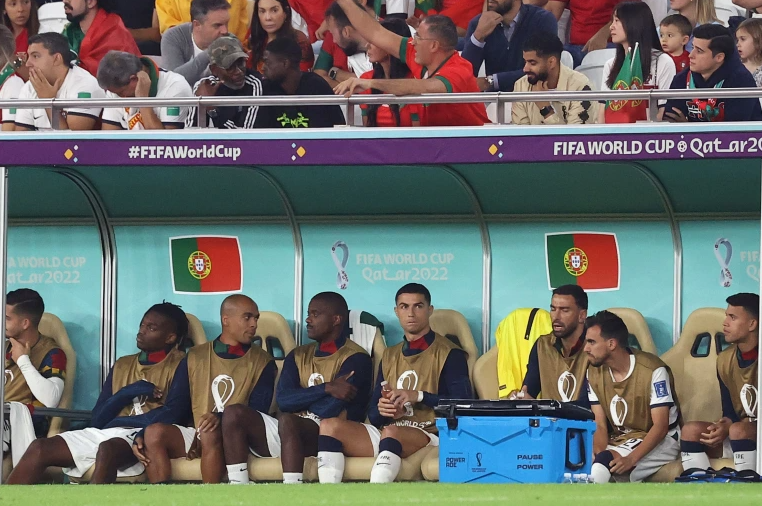 Cristiano Ronaldo Portugal career is hanging in the balance following the national team’s crushing 1-0 loss to Morocco in the World Cup’s quarter-final stage.

Ronaldo, 37, one of the greatest ever to play the game, has never won the tournament, and likely never will following Morocco’s breathtaking and historic upset of Portugal on Saturday night in Qatar.

As Morocco’s bench stormed the field in elation, setting Al Thumama Stadium alight and triggering celebrations across Africa and the Arab world, the cameras were quick to pan to the Portuguese captain.

The contrast, by comparison, was striking.

Ronaldo briskly exited the field, took a final stoic glance at the crowd before cupping his hand over his face in utter disappointment.

Notably, he exited the pitch unaccompanied by teammates, apparently sobbing, as he strode past reporters, camerapeople and FIFA staff towards the Portuguese dressing room. He was almost completely alone.

If Qatar is indeed the end, it will be a bittersweet conclusion to a legendary career for the Portuguese player.

Ronaldo’s biggest moment at the tournament – when he became the only male player in history to score a goal in five separate World Cups – will surely be remembered for generations.

Ronaldo holds the world record as the all-time overall leading scorer in international play with 118 international goals in 196 matches. He is also a five-time Ballon d’Or winner. The recipient of four European Golden Shoes and has seven league titles under his belt.

What happens to Ronaldo career after Portugal’s World Cup exit?

In October, he scored the 700th goal of his club career for Manchester United.

The 2022 World Cup, though, was surely a rollercoaster of ups and downs.

Notably, Ronaldo was benched in Portugal’s first knockout round 6-1 demolition of Switzerland – the first time since 2008 – after he angrily reacted to being substituted against South Korea in the side’s final group match. Reports later swirled that he had threatened to walk out on the Portuguese squad amid their World Cup run. Portugal denied those reports.

On Saturday, Ronaldo again relegated to the bench by head coach Fernando Santos. Who gave his replacement, Gonçalo Ramos, the nod after he scored a hat-trick in the match against Switzerland.

“No regrets,” Santos said of his decision not to start his captain for the second consecutive match.

“Cristiano is a great player, he came in when we thought it was necessary. We have no regret.”

Ronaldo not subbed onto the pitch until the 51st minute, and as he rushed onto the field. He swapped the captain’s armband with veteran defender Pepe before turning. His attention to his remaining teammates, whom he desperately urged to press on.

His late-game cameo met with a resounding chorus of jeers at Al Thumama Stadium. Where Portugal fans vastly outnumbered by Morocco supporters. As the final whistle neared, Ronaldo threw his arms up to the Portugal fans, in a last-ditch attempt to rouse the crowd.