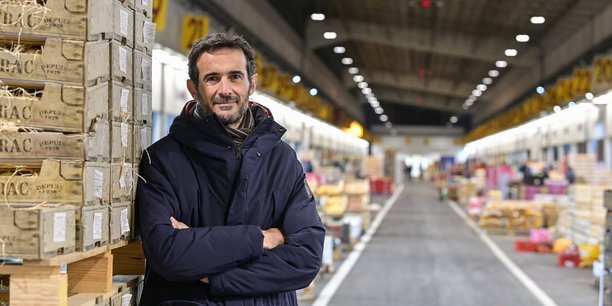 The Marché d’intérêt national (MIN) de Bordeaux Brienne, which covers twelve hectares in Bordeaux Belcier, will celebrate its 60th anniversary in 2023. Constrained by an increasingly urban environment, this logistics platform, which is essential for feeding the Bordeaux conurbation, is working on a densification project. The aim is to gain up to 40,000 m2 and to open up to other activities deemed complementary.

Located on twelve hectares in the Belcier district, which has been extensively redeveloped in recent years by the EPA Bordeaux Euratlantique, the Bordeaux Brienne National Interest Market saw 161,000 tonnes of goods brought in by a myriad of lorries last year. But although it is now surrounde.

The Bordeaux Brienne MIN is thinking of expanding and diversifying

Buildings and new residential and office towers, “there was never any question of moving the MIN out of Bordeaux. Alain Juppé decided to keep it in the heart of the city and it will stay there,” says Claude Mellier, president of the MIN and vice-president of Bordeaux Metropole. Because it is indeed the Metropolis that owns the site, while its management is ensured by an autonomous company led by Pierre Pichardie.

The MIN is usually in full swing from midnight to midday, with a peak of activity from 4 to 6 am. Fruit and vegetables (40%), groceries (18%), flowers (15%), but also dairy products, cheese, meat, seafood and other materials for the catering industry: 750 employees from a hundred or so companies work there every day. With a period

Your flowers, fruit, vegetables or oysters bought for Christmas: they all come from the same place. The Bordeaux-Brienne market is an essential link between production and retail. It covers 12 hectares and is home to 100 companies with nearly 750 employees.
For generations, the Bordeaux National Interest Market (MIN) has been the largest source of supply and distribution in the Nouvelle-Aquitaine region. Philippe Arrivet’s family has been in Brienne for four generations: “My son is also there, our nursery started in 1899,” says the wholesaler.

With his experience, he has been able to observe the changes in the market. “The trade has evolved, so now we are more aware of ecology,” says Philippe Arrivet.

The arrival of the supermarkets
In February 1963, the MIN opened its doors with the ambition of proposing an offer adapted to the strong consumer demand of the time. 60 years later, the wholesalers have to face new challenges.