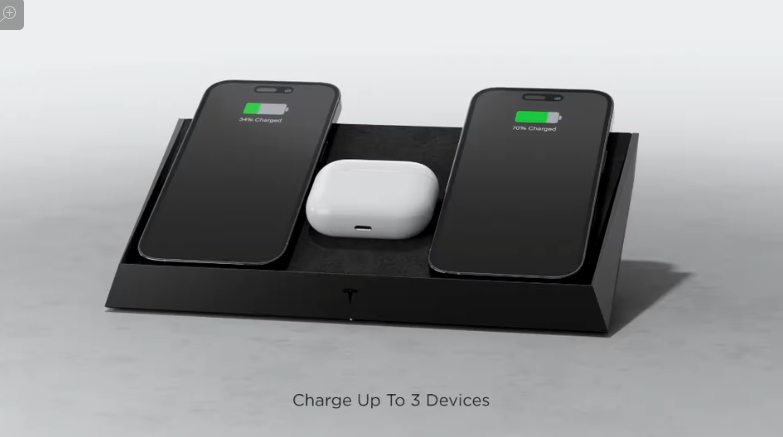 Late last month, Elon Musk decided to start a feud with Apple. What feels like a million years later, Tesla has introduced a $300 wireless charging mat that promises some of the features that were supposed to be included in Apple’s AirPower.

The concept for AirPower was simple: A mat that could wirelessly charge up to three devices. Without fiddling around to find the exact placement of the charging coils. The device was expected from Apple in 2017 and fans were left scratching. Their heads over its absence until the company officially canceled it in 2019. “After much effort, we’ve concluded AirPower will not achieve our high standards and we have canceled the project.” Apple said in a statement at the time.

It was a little baffling that a company with the resources and talent of Apple couldn’t figure out how to do what seemed like a relatively simple task. So it’s reasonable to assume Elon is needling the Cupertino giant. A little bit with the Thursday announcement of Tesla’s Wireless Charging Platform.

Unfortunately, this is just a very expensive repackaging of a charging system that’s been around for a couple of years. Tesla is using FreePower’s tech and giving it a bit of a Cybertruck aesthetic. FreePower licenses its position-free wireless charging design to other companies and it’s shown up in well-reviewed devices like the Nomad Base Station Pro. By most accounts, it works as advertised. You can just drop a device anywhere on the mat and get 15W of fast charging power. You can even slide the device around without interrupting the connection.

In its 2020 review of the Nomad Base Station. The Verge said that it “may one day be the future of wireless charging technology, right now. The current version is just too expensive and too limited.” That device was going for $229 at the time. Nomad doesn’t produce that model anymore but it still offers refurbished versions of it on its site for $120.

Tesla Introduces Its Own $300 Version of Apple Canceled AirPower Charger

While FreePower seems to have cracked the problem of positioning on a wireless charger. You still can’t slap an Apple Watch down on the mat. These chargers only work with devices that are compatible with the Qi standard and the Apple Watch requires either. The included magnetic puck or a MagSafe charger.

So, Tesla hasn’t met the standard that Apple originally set out to accomplish (simultaneously charging an iPhone, Apple Watch, and AirPods), it didn’t actually develop the tech, and it’s charging an absolutely ridiculous price for its mat.

I can’t say for certain that this launch entirely designed to annoy Tim Cook. It’s entirely possible that Musk just wanted to get some kind of positive news about Tesla circulating. The EV manufacturer’s stock price hit a new two-year low on Friday as investors’. Concerns over Musk’s singular attention on Twitter have reached a boiling point.

There are two major problems at Tesla: Elon keeps selling off billions of dollars. Worth of stock and his right-wing politics are turning off the people who are most likely to buy an electric vehicle (liberals and people who believe in climate change). The fact that Tesla started offering a $7,500 discount on two of its models. This week has only served to exacerbate investors’ concerns.

An overpriced charging mat won’t be reversing Tesla’s fortunes but if you really want. One you can pre-order here and they’ll allegedly begin shipping in February. Just keep in mind that it’s the charging equivalent of slapping. A new coat of paint on a roofing torch and calling it a flamethrower.