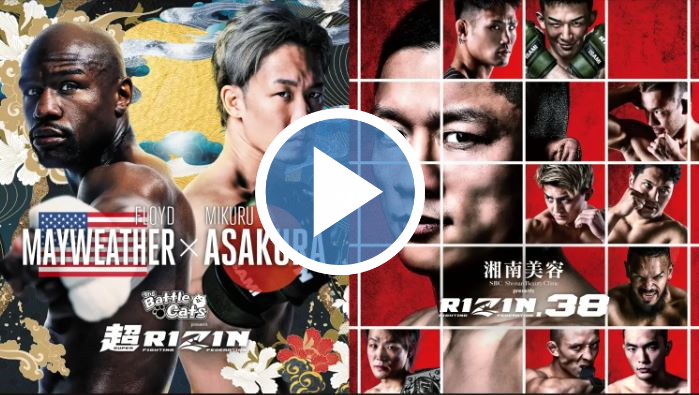 “Super RIZIN” & “RIZIN 38”: An exhibition match between Floyd Mayweather, a boxing legend who has been undefeated in 50 fights, and Mirai Asakura, who has risen from a street brawler to RIZIN’s leading role, will be held on Sunday, September 25th at Saitama Super Arena’s “Super (Super) RIZIN”. 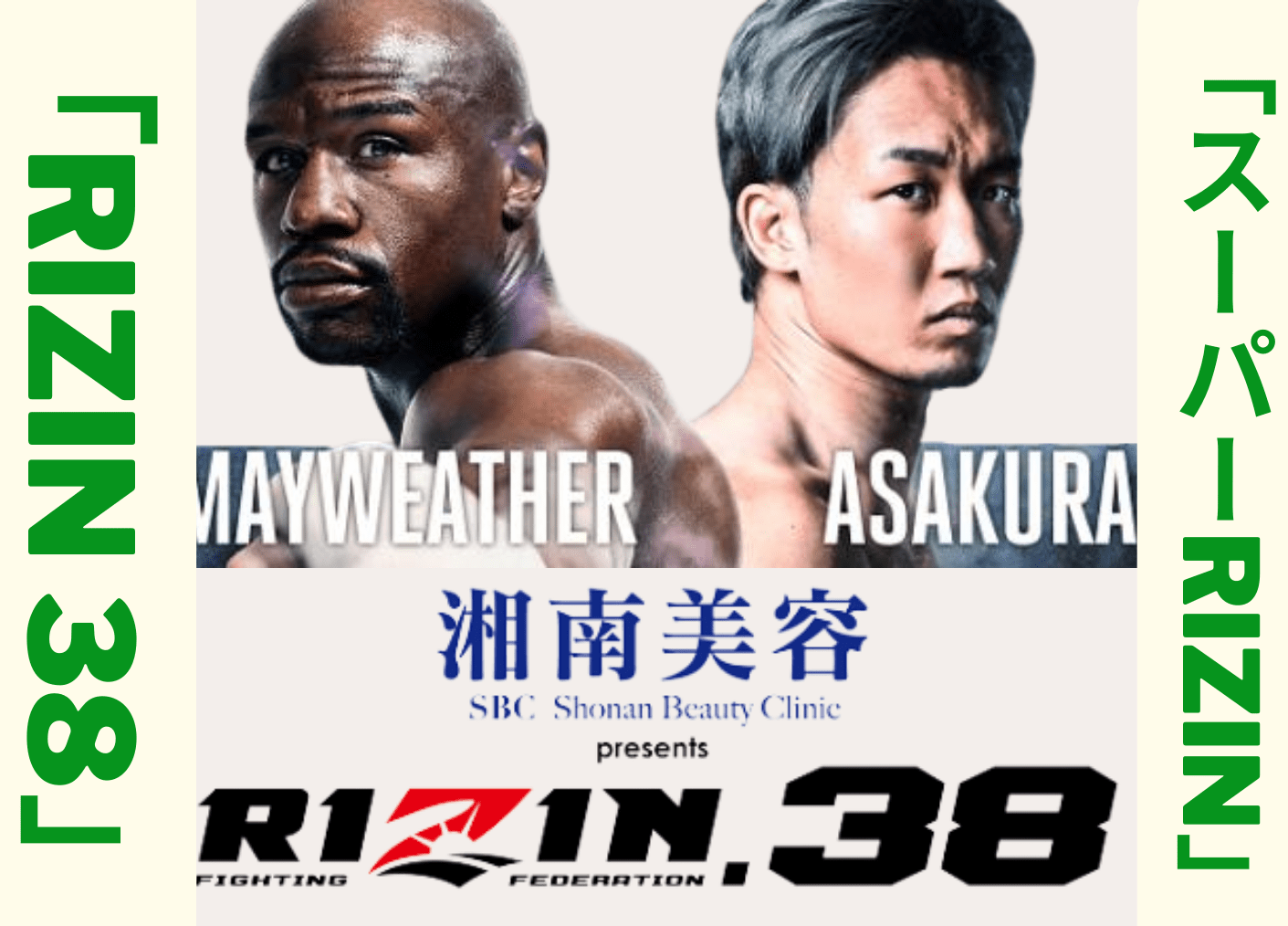 The domestic distribution platforms for the match broadcast of “Super RIZIN” & “RIZIN 38”, where the exhibition match between Floyd Mayweather and Mirai Asakura will be held, are the Internet video distribution service “ ABEMA PPV ” and RIZIN’s official “ RIZIN STREAM ”. PASS ”, and at the press conference on September 6th to announce the additional battle cart, “ SKY PerfecTV! ” Was also reveale. Both will be live streame via PPV (pay-per-view). The differences between “ABEMA” and “RIZIN STREAM PASS” and how to watch them will be explaine later.

“Super RIZIN” & “RIZIN 38” are currently scheduled to be telecasted on terrestrial television in any form, and there is no way to watch them for free.

In addition, it is recommende to purchase tickets early on the day of the match, as it may take time to process purchases due to increased traffic. Although it is a two-part tournament, you can watch both tournaments through one viewing ticket (however, you cannot watch it across distribution companies.

The distribution on “ABEMA PPV” will be live from 9:00 on the day, and can be viewed for 5 days after the broadcast ends. Only ABEMA coins (described later) can be purchased for viewing tickets, and it is necessary to purchase (convert) the ABEMA coins for viewing tickets from a smartphone, tablet, or PC once.

General ticket on the day

Delivery period: September 25th (Sun) 09:00 – September 30th (Fri) 23:59
Regular member: undecided
ABEMA premium members: To be determine
What is Mirai Asakura Support Ticket?
“Support ticket” is a special ticket that includes digital benefits in addition to the tournament broadcast video of the general ticket (archive ticket). The release date of the support ticket and the details of the benefits will be announce later on the ABEMA official Twitter.

Only the benefits of support tickets will not be sold, and if you purchase a support ticket after purchasing a general ticket, it will be a double purchase (as a viewing ticket), but please be aware that it cannot be canceled or refunded.

What is ABEMA Premium?

ABEMA Premium is a subscription (fixed rate) service with a monthly charge of 960 yen (tax included), and as a benefit, you can purchase discount tickets for ABEMA PPV programs and rental works such as “Super RIZIN” & “RIZIN 38”.

Originally a service to improve the viewing environment on “ABEMA”, in addition to programs that can only be viewed on ABEMA Premium (those with the “Premium” mark), ABEMA’s distribution programs with a fixed free viewing period (on Demand) can be viewe at any time without advertisements (with some exceptions), and you can use the “video download function”, “chasing playback function”, and “misse comment function”, so you can enjoy watching without stress.

At ABEMA, except for the latest works such as free linear channels (channels that distribute programs in a timetable like TV broadcasting), dramas, and animations, in many cases, the first few episodes are free and the remaining episodes are treated as premiums. . In contrast to Netflix and Amazon Prime Video, which focus on overseas content, it focuses on domestic content, and you can enjoy TV Asahi dramas and variety programs at no additional charge.

In addition, there is a martial arts channel in the ABEMA linear channel, which broadcasts the matches of domestic and overseas martial arts organizations and competitions, as well as a wealth of related programs. It can be said that it is the strongest video distribution service for martial arts in Japan. The groups and brands that are regularly handled are as follows. In addition to the list, we also broadcast one-off events.

ABEMA Premium has a free period of 2 weeks (14 days), and you can easily try it if you are registering for the first time. If you cancel before the cancellation deadline 13 days after registration, you will not be charged at all. ABEMA can be enjoyed just by streaming for free, but the replay function by “chasing playback” is also compatible with martial arts, and there are completely premium limited tournament videos such as New Japan Pro-Wrestling, so if you want to enjoy it to the full, ABEMA Premium is the best choice. deaf.

RIZIN’s official Internet video distribution service “RIZIN STREAM PASS (originally announced as “RIZIN FIGHT PASS”)” has been officially launched since October (800 yen per month including tax). It is 550 yen including tax. Members of this service can watch past match videos and original programs scheduled to be distributed in the future at any time, as well as receive benefits such as PPV viewing fee discounts and RIZIN event watching ticket sales fastest.

After the official opening, in addition to the regular membership course, there will be multiple membership types such as the unlimited PPV viewing course.

When purchasing tickets, you can select a “support code”, and a part of the tournament sales will be returned to the selected player. Viewing on a web browser will only be video, but when viewing on the app, it supports comments, avatar actions, and gifting (throwing coins), so you can enjoy the same way as “ABEMA”.

“ABEMA PPV” is a price benefit for the first time when you become an ABEMA premium member (960 yen including tax per month). For example, advance ticket 4800 yen + premium tax 960 yen = 5760 yen . If you continue to watch “ABEMA” in the future, it will be a powerful option. However, the purchase (conversion) of ABEMA coins required for viewing PPV and rental works is troublesome, so the drawback is that it lacks simplicity (the coin has an expiration date, which is also a disadvantage). Compared to competing flat-rate video distribution services, the content is more domestic, so it may be unsatisfactory.

“RIZIN STREAM PASS” is, for example, 5400 yen including advance ticket tax + 550 yen including membership registration tax = 5950 yen . would be optimal.

However, the monthly fee for “RIZIN STREAM PASS” will be 800 yen including tax after the official launch in October, so if you can’t find value in content such as pre-sales of spectator tickets, RIZIN’s past videos, and special programs, It’s a tough choice.

Furthermore, “ABEMA PPV” can be during PPV live distribution, but with “RIZIN STREAM PASS”, live distribution can only be watche from the start of viewing, and rewind playback is also possible. I can’t. The archive (missed) distribution will be at noon the next day, so “ABEMA PPV” will have an advantage for those who want to watch it immediately on a time shift.

“SKY PerfecTV! ], CS/Hikari’s “Premium Service” will basically TV broadcast, and you can be convince at 6000 yen, which is 1000 yen higher than the PPV of the usual RIZIN tournament, and if you are already a user, it will be less hassle to watch. right. If you become a new user, you cannot purchase a PPV ticket just by registering for a two-week free period, and of course you need a compatible tuner-equipped device, a BS/CS antenna or an internet optical line (naturally compatible with premium service light). Become. You can also enjoy online distribution with the official app, but it may be troublesome because you need to purchase tickets at the tuner. However, “SKY PerfecTV! ] will have a big advantage in that it can be recorde.

In conclusion, if you have an environment that you are use to using, it should be fine. If you are registering for ABEMA Premium for the first time (even if you are an ABEMA regular member), you can try the 14-day free period (trial), so you can watch it for only 4800 yen (4000 coins) for advance tickets.

As mentioned above, there are no terrestrial TV broadcasts of “Super RIZIN” & “RIZIN 38”. After withdrawing from Fuji TV, the PPV broadcast of the conventional tournament “SKY PerfecTV! (BS/CS)” broadcast at a later date, but both TV and Internet paid distribution (PPV) only, and free viewing will not be possible.

In the future, there is a possibility that match footage will be distribute free of charge on RIZIN. Official YouTube channel, etc., but past match footage that release on YouTube. Paid content (within the monthly service) of “RIZIN STREAM PASS” in the future. We recommend watching PPV for “Super RIZIN” & “RIZIN 38”.

RIZIN official, ABEMA official, SKY PerfecTV! Program footage of events and matches of “Super RIZIN” & “RIZIN 38” released on various video distribution services by non-official accounts is illegally uploaded. Although broadcast program distribution companies have said that they will take legal action against those who upload illegally, viewing and downloading may be punishe depending on the legal judgment, so please watch in a legitimate way.

On the day of the tournament, Part 1 “Super RIZIN” (4 matches are planned) will start at 12:00, and Mayweather vs Mirai Asakura is expecte to be held from 13:00 to 14:00 . After that, CEO Nobuyuki Sakakibara explaine that the second part of “RIZIN 38” was schedule to start at 15:00 after a break of about 1 hour, and that the entire event would end at 20:00. However, it may change depending on the progress of the event.