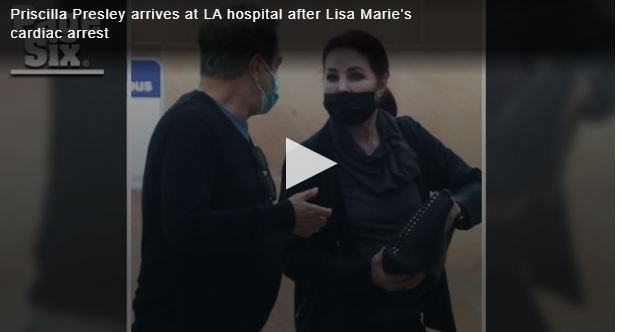 Priscilla Presley rushe to her daughter Lisa Marie Presley’s side after the 54-year-old went into cardiac arrest Thursday.

The ex-wife of rock icon Elvis Presley was photographed arriving at West Hills Hospital and Medical Center in Los Angeles after Lisa Marie suffered a medical emergency at her home in Calabasas, Calif., earlier in the day.

Priscilla Presley rushed to the hospital to be by her daughter Lisa Marie Presley’s side on Thursday.
WCP,4cnrs / BACKGRID
Priscila, 77, was seen making a quick dash to the entrance as she spoke with an unidentified male.

She was dressed in all dark colors with a plum shirt, black sweater, black pants and a black face mask.

Although most of her face was covered, her eyes appeared to show a stern and concerned look.

The Presley matriarch told The Post on Thursday, “My beloved daughter Lisa Marie was rushed to the hospital.

More family members were also seen arriving at the hospital to show their support.

Ben Smith-Petersen, who is married to Lisa Marie’s daughter Riley Keough, was spotted Thursday consoling relatives outside of the entrance.

The stuntman, who was pictured in a trucker hat and casual navy blue outfit, gave warm hugs to other loved ones upon his arrival.

Earlier on Thursday, TMZ reported that paramedics had to perform CPR on Lisa Marie and administer epinephrine to her after her heart stopped beating suddenly.

The medics were, fortunately, able to revive her and get a pulse, before they transported the “Lights Out” singer to the hospital.

On Tuesday evening, Lisa Marie was seen out in public, seemingly in good health as she stepped out with Priscilla to support Austin Butler for his 2023 Golden Globe nomination for his role in “Elvis.”

Priscilla Presley has spoken out following news that her daughter, Lisa Marie, was hospitalized on Thursday (Jan. 12).

“My beloved daughter Lisa Marie was rushed to the hospital. She is now receiving the best care,” Priscilla wrote in a statement posted to Instagram. “Please keep her and our family in your prayers. We feel the prayers from around the world, and ask for privacy during this time.”

Los Angeles County paramedics arrived at a Calabasas home at 10:37 a.m. following a report of a woman in full cardiac arrest, a spokesperson for the fire department told Associated Press, as was initially reported by TMZ. Paramedics The L.A. County Sheriff’s Department also added that paramedics performed CPR and “determined the patient had signs of life” before transferring her to the hospital.