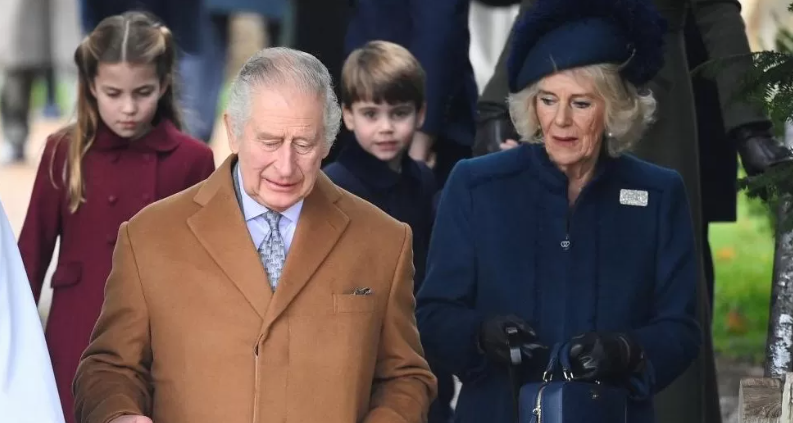 King Charles has greeted crowds at Sandringham after attending a Christmas Day church service for the first time as monarch.

The King and Camilla, the Queen Consort joined by the Prince and Princess of Wales, their children and other senior royals at the Norfolk estate.

It is the first time members of the Royal Family have spent Christmas at Sandringham House since 2019.

The royal standard is flying above the house, marking a return to traditional royal festivities.

Hundreds of people turned up to catch a glimpse of the Royal Family on Sunday. Some had even camped out overnight at the gates, sitting in camp chairs and wrapped in blankets, while others brought bunches of flowers and gifts to hand to the royals.

The King and his family made the short walk from Sandringham House to the church just before 11:00 GMT.

After the 45-minute service, the King and Queen Consort, as well as the Prince and Princess of Wales, spoke to several people in the crowd.

Prince Louis joined his parents at the Christmas Day church service for the first time.

The Earl and Countess of Wessex, and their children, as well as Princess Beatrice and Eugenie, were also at Sandringham.

Their father, the Duke of York, was also there. Prince Andrew not often seen in public with the Royal Family since stepping down as a working royal in 2019 following the controversy surrounding his friendship with the convicted sex offender Jeffrey Epstein.

The Duke and Duchess of Sussex who last celebrated Christmas at Sandringham in 2018 were not there.

It is the first year the King has hosted the Royal Family’s traditional gathering at the Norfolk estate since the death of his mother.

Queen Elizabeth II hosted 32 Christmases at Sandringham but forced to cancel her annual festivities in 2020 and 2021 due to the Covid pandemic.

Later this afternoon the King’s first Christmas Day message will broadcast. It recorded on 13 December in St George’s Chapel at Windsor Castle,

Sandringham House has been the private home of British monarchs for more than 160 years.
Earlier, the Prince and Princess of Wales issued an image of Prince George’s painting of a stag alongside their Christmas message on Instagram.