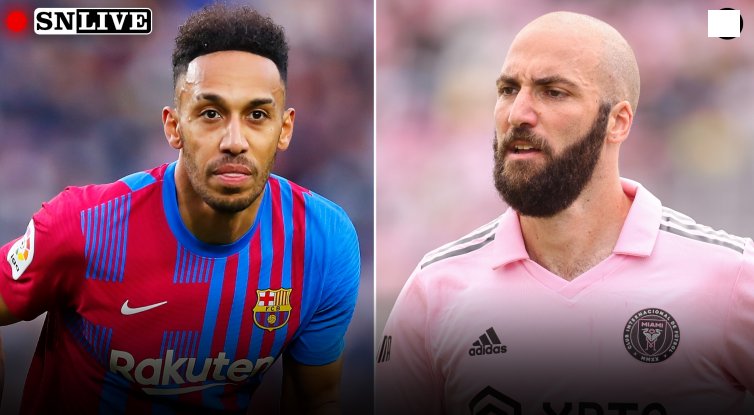 The Catalan club only managed a 1-1 draw against Spanish fifth-tier club Olot in its first summer pre-season friendly a week ago, but as more first-team regulars are reintegrated into the squad, the results should begin to change.

Inter Miami, coached by Phil Neville, will provide a stiffer test than in Barcelona’s pre-season opener, but the MLS side sits just ninth in the Eastern Conference, two points back of the final playoff spot. A comeback win over Charlotte FC on the weekend provides a boost, but on the whole, results were expected to be better in 2022.

Inter Miami’s DRV PNK Stadium in Fort Lauderdale is expected to be sold out for the first time in club history, with the senior team playing its first season in 2020.

Sporting News will be following the match live and providing score updates, commentary and highlights as they happen.

33 mins to kick: Robert Lewandowski is not ready to play for Barcelona just yet, having just made his move to the club official yesterday, but he is in Miami and will be at the stadium for the game. He took the field for warmups with his teammates to get some cardio in before eventually seeing himself in a place in the stands.

Lewandowski getting some work in before Barca vs. Inter Miami 🌴 pic.twitter.com/dqEkcgstvE

58 mins to kick: The lineups are in, and it’s both clubs have produced strong sides.

For Barcelona, Andreas Christensen makes his debut for the club at center-back, in front of regular goalkeeper Marc-Andre ter Stegen. New signing Franck Kessie starts in midfield, as does new winger Rafinha. Pierre-Emerick Aubameyang starts up front, with young winger Ansu Fati alongside in support.

63 mins to kick: It’s 86 degrees in Miami currently, with 64% humidity. Hot and muggy conditions for this one.

110 mins to kick: Viewers during tonight’s match may notice that Barcelona head coach Xavi is not on the sidelines for the match in Miami. That is down to a visa issue that delayed his travel to the United States.

During Xavi’s time with Qatari club Al Saad, both as a player and manager, prior to rejoining Barcelona, he was occasionally required to travel to Iran. Because of this, extra paperwork was required to approve his travel to the United States. That has been resolved, according to the Spanish publication Sport, and he will take a flight Wednesday morning and join the club in Miami the morning after the match.

120 mins to kick: No matter the result, Inter Miami players and fans will relish the chance to take on one of the world’s high-profile clubs. The fans have responded in kind, selling out the stadium for the first time in club history.

Get ready for an unforgettable night💗

Ex-Napoli, Juventus and Real Madrid striker Gonzalo Higuain will start up front for Inter Miami against a familiar foe. The former La Liga champion has been a late substitute for much of the MLS season, but he gets an opportunity against an old rival, with regular starter Leonardo Campano rested and not in the squad for this match.

While Brek Shea and Robbie Robinson are expected to miss out, other Inter Miami regulars are in play. It could have been a chance for U.S. international DeAndre Yedlin to get some rest, but he starts despite leading the club in league minutes this season. The same goes for playmaker Alejandro Pozuelo who has four goals and four assists on the MLS season thus far.

19-year-old Romeo Beckham, the son of owner David Beckham and playing for MLS Next club Inter Miami II, gets the call-up on the bench. So too does manager Phil Neville’s son Harvey Neville, 20, who is a teammate of Beckham’s at Inter Miami II.

The Barcelona lineup is a strong one for this match, with Pierre-Emerick Aubameyang and Ansu Fati in the attack. New signings Raphinha, Franck Kessie, and Andreas Christensen all start, a boon for the fans looking to get an eye on the squad additions.

American full-back Sergino Dest starts the match in his home country. Barcelona could see the return of winger Ousmane Dembele, who rejoined the group last week after signing a new contract, although he starts on the bench.

Head coach Xavi will not be on the sidelines with the club due to a visa issue, missing this match. He will link up with the squad following the match and be on hand for the remainder of the U.S. trip.

The club friendly from DRV PNK Stadium in Ft. Lauderdale, Florida is set to be available to watch globally on Barcelona’s subscription service Barca TV+ in all territories.

In the United States, the match will be televised on TUDN, which is available to stream via fuboTV.

While Barcelona has a much-improved squad that would be expected to roll over MLS competition on any given day, the fact that it’s a pre-season club friendly must be taken into account.

It’s entirely unclear which Barcelona players will take the field and which players will be rested. Still others who do see the pitch could have their minutes managed, and the squad chemistry between first-team regulars and fringe players could be off.

Still, Inter Miami is not expected to win the match, and the odds reflect that. The club has had its stumbles in this MLS season, and in the middle of a laborious campaign, it’s likely that Inter Miami rests key players.