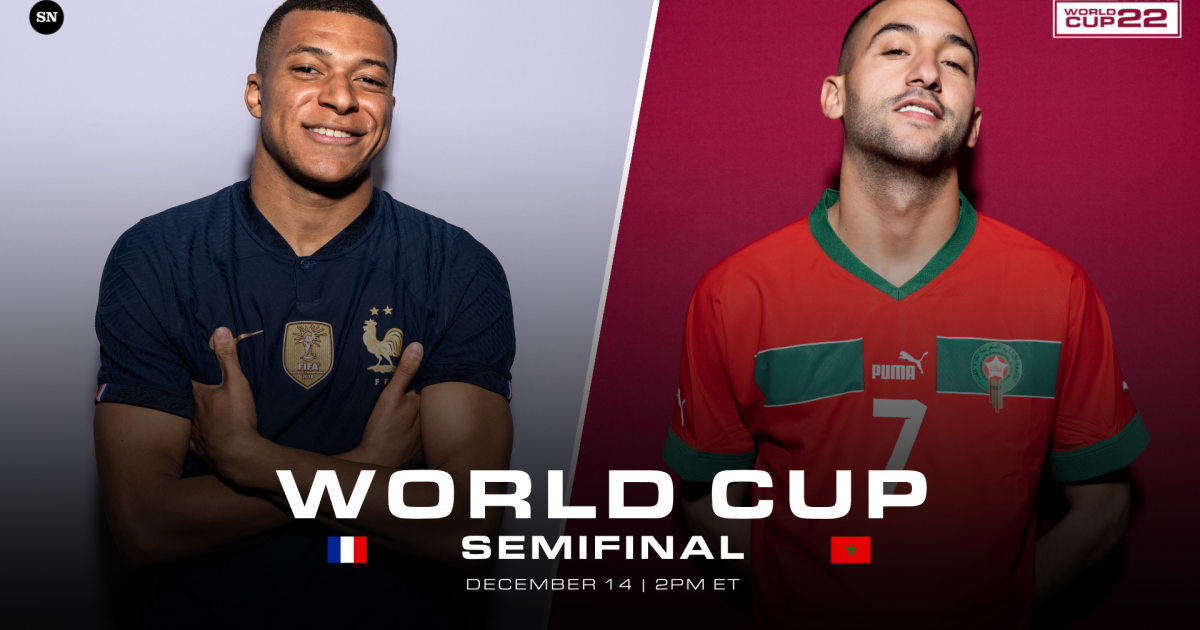 It’s the favorites vs the fairytale as France and Morocco collide in the second World Cup semifinal on Wednesday.

France have shaken off a raft of injuries and the supposed ‘world champions curse’ to make a second successive semifinal. They had to work hard to beat England in the quarterfinals, but a goal from Olivier Giroud and a late Harry Kane missed penalty helped Les Bleus get the job done.

Morocco, meanwhile, continue to shock and delight pundits and fans alike at Qatar 2022, and they are now just 90 minutes away from the final.

Tonight at 20:00, is the last semi-final of the 2022 World Cup in Qatar. Morocco becomes the first African representative in the last four of a World Cup.

France vs Morocco: How to watch World Cup semi-final online and on TV channel, kick-off time

France and Morocco face each other for the first time in official competition tonight in the semi-finals of the 2022 World Cup at the Al-Bayt stadium in Al-Khor, Qatar, probably in front of a home crowd that will support the North Africans.

The world champions beat Poland and then England, and are hoping to reach a fourth World Cup final against Leo Messi’s Argentina, who qualified after beating Croatia in the other semi-final (3-0).

When and on what channel can you watch France vs Morocco?
Venue: Al-Bayt Stadium (Al-Khor)
Date and time: Wednesday 14 December 2022 at 8pm
Channel: Live on TF1 and beIN Sports (follow France – Morocco live with commentary on L’Équipe)

France vs Morocco: How to watch World Cup semi-final online

WORLD CUP 2022 – How to watch the semi-final between Kylian Mbappé’s France and Morocco? Here’s everything you need to know to watch the match on TV or the web.
The French team is aiming for a return to the final. Opposed to the surprise of this World Cup 2022, Morocco of Achraf Hakimi, the band Didier Deschamps wants to play a fourth final in its history after 1998, 2006 and 2018.

Schedule: What time does the France vs Morocco match start?
The match will start at 7.50pm French time on TF1 (channel 1) or MYTF1. Kick-off will be at 8pm.

Venue of the match France – Morocco
The match will be playe at the Al-Bayt stadium.

The coach Walid Regragui managed to create a successful team by combining experienced managers and talented young players. The Moroccans eliminated Portugal (1-0) in their last match, and notably had Christiano Ronaldo leave the team through the back door.

France’s Aurelien Tchouameni and Dayot Upamecano remained in treatment on Monday. The two players are under surveillance due to minor problems (a crutch and a sore throat) that do not inspire concern. Morocco will probably have to do without Nayef Aguerd, who has hurt his thigh. Romain Saïss is also uncertain. Here is the probable composition of the two teams.

What time and on what channel can you watch France v Morocco live?
The match between France and Morocco is schedule for 8pm on Wednesday. It will be co-broadcast by TF1 and beIN Sports 1. You want to know the whole TV program of the World Cup? It’s here!