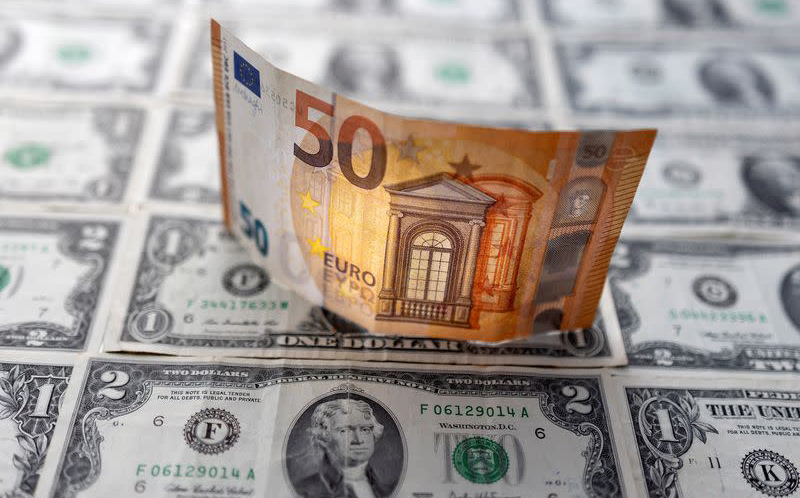 The euro slumped to a 20-year low against the dollar on Thursday as a combination of soft economic data and dovish comments from European Central Bank policymakers stoked fears that the bloc was heading for a recession. The currency fell as low as $1.0837 overnight, its weakest level since September 2003, before recovering slightly to trade at $1.0854 in the morning European trade.

The move comes amid a perfect storm of headwinds for the eurozone economy, with a manufacturing downturn being exacerbated by the ongoing trade dispute between the United States and China, as well as Brexit uncertainty.

ECB President Mario Draghi added to the downbeat mood on Thursday, saying that the central bank was prepared to provide more stimulus if needed to support the economy. “The risks surrounding the euro area outlook remain tilted to the downside and relate mainly to global factors,” Draghi told a news conference after the ECB left interest rates unchanged.

“Against this background, the Governing Council stands ready to increase the size of the asset purchase program and adjust its composition, by as much as necessary and for as long as needed,” he added.

The euro’s weakness is bad news for European companies that rely on exports, as it makes their products more expensive in dollar-denominated markets. It also raises the specter of imported inflation, as the cost of imported goods rises. The euro has now lost around 4 percent of its value against the dollar so far this year and is down more than 10 percent from its 2018 highs. Analysts expect it to fall further in the months ahead.

“The market is pricing in more ECB easing, and we think that’s going to be delivered,” Kit Juckes, global strategist at Societe Generale, told CNBC’s “Squawk Box Europe.” I don’t know where the euro stops. I think parity with the dollar is quite possible by the end of the year,” he added.

The ECB’s dovish comments come just a day after the U.S. Federal Reserve delivered its first interest rate cut in more than a decade, in a move that was widely seen as an insurance policy against further global economic headwinds.

“The ECB is doing very little, if not nothing. With quantitative tightening ending and new stimulus beginning, the Fed is staying ahead of the curve,” Trump said in a tweet on Thursday. The euro’s weakness is also a boon for U.S. companies doing business in Europe, as it makes their products more competitive.”A lower euro is good for European exports and bad for imported inflation. It’s good for American companies with European exposure,” Juckes said.”It adds to the sense that the U.S. is winning the trade battle, and that’s bad for risk appetite generally,” he added. The eurozone is not the only economy feeling the pain from the global slowdown. China’s manufacturing sector contracted for a fourth straight month in July, according to official data released on Thursday, underscoring the challenges facing the world’s second-largest economy.

The euro has slumped to a two-decade low against the US dollar, as fears of a recession in the eurozone continue to mount.

In this blog post, we’ll take a look at the latest economic data from the eurozone and explore what it could mean for the future of the euro.

In this blog post, we’ll take a look at the latest economic data from the eurozone and explore what it could mean for the future of the euro. We’ll also discuss the potential implications of a European recession for global financial markets.

The euro slump: what’s behind the recent decline?

The euro has been on a bit of a roller coaster ride over the past few months. After reaching a high of nearly $1.40 in early May, the currency has fallen sharply, hitting a low of around $1.20 in early August.

There are a number of factors that have contributed to the euro’s decline.

Is a European recession now inevitable?

A European recession appears to be increasingly likely, as the continent’s economy slows down and its debt crisis continues. The European Commission has slashed its growth forecast for the eurozone this year, and many analysts are predicting a technical recession – two consecutive quarters of economic contraction – in the first half of 2012.

There are a number of factors that could tip Europe into recession. The continent’s economy is already slowing down, and the debt crisis is weighing heavily on business confidence and investment. In addition, high unemployment – particularly in countries like Spain and Greece – is further weakening consumer demand.

If Europe does slide into recession, it is likely to have a knock-on effect on the global economy. Europe is a major trading partner for many countries, and a slowdown in European demand could lead to slower growth or even recession in other parts of the world.

So far, the impact of the European debt crisis on the global economy has been relatively contained. But if Europe does enter into a technical recession, it could have wider implications for the world economy.

What would a European recession mean for global financial markets?

A European recession would have a significant impact on global financial markets. Firstly, it would lead to a decrease in demand for exports from Europe, which would negatively affect economies around the world that depend on trade with Europe. Secondly, it would cause an increase in the value of the US dollar, as investors seek safe-haven assets in times of economic uncertainty. This would make US exports more expensive and put downward pressure on the US economy. Finally, a European recession would increase the risk of defaults on government and corporate debt, as well as increase borrowing costs for companies and consumers. This would further weigh on global economic growth.

What does the future hold for the euro?

The future of the euro is uncertain. The European Union is facing significant economic and political challenges, which could lead to the demise of the euro. However, it is also possible that the euro will continue to exist, albeit in a different form.

The European Central Bank’s (ECB) decision to cut interest rates has failed to stem the euro’s slide against the US dollar, with the single currency hitting a new low for the year. The euro has now fallen to its lowest level since 2003 and is down around 8% against the dollar so far this year.

The ECB’s move came as a surprise to markets and was aimed at providing stimulus to the Eurozone economy in the face of rising recession fears. However, it appears that the market reaction has been one of disappointment, with investors selling off the euro in response to the central bank’s actions.

The euro’s decline is likely to continue in the near term, as fears over a potential recession in the Eurozone continue to weigh on investor sentiment. However, with the ECB’s actions providing some support, the euro is unlikely to fall much further from current levels.