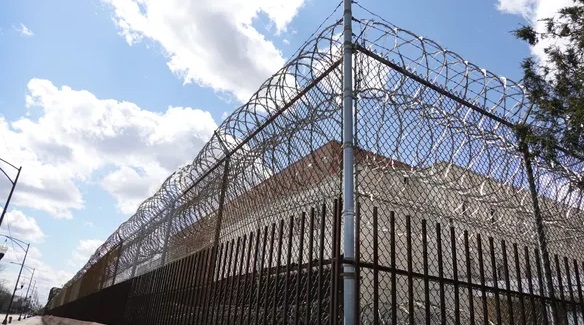 An inmate at Cook County Jail has tested positive for monkeypox, according to officials.

A statement released Tuesday by the Cook County Sheriff’s Office said a positive case of monkeypox was confirmed Monday at the jail.

The person has been in medical isolation since July 19, when they first showed virus symptoms.

Officials said the individual was previously being held in a separate intake housing for those who were newly admitted at the jail to prevent the spread of COVID-19.

The person is believed to have contracted the virus prior to arriving at Cook County Jail.

Read the full statement below:

Below please find our statement regarding the identification of a case of monkeypox at the Cook County Jail:

A positive case of monkeypox was confirmed yesterday at the Cook County Jail. The individual has been in medical isolation since July 19, when the person was first tested after showing symptoms of the virus. Previously, the individual was being held in separated intake housing utilized for all newly admitted individuals at the Jail to prevent the spread of COVID-19.

Due to the vast experience gained in combatting the spread of COVID-19, many key protocols are already in place to combat monkeypox, including medical isolation, quarantine, screening, and testing. The individual was immediately removed from intake housing and taken to Cermak Medical Services for medical treatment before being placed in medical isolation. The housing unit where the individual was living has been quarantined and monitored with daily screenings. Contact tracing is ongoing. Officials believe the risk to staff and individuals in custody at the Jail is low based on how the disease is transmitted.

The individual is believed to have contracted the virus in the community prior to being ordered into custody at the Jail. Given the near inevitability that a positive individual would be ordered into custody, both Jail staff and Cermak Health Services – along with the Chicago Department of Public Health, and the Illinois Department of Public Health – have coordinated efforts to address the potential for the monkeypox virus to enter the jail.

Since May 31 – more than two weeks before the CDC issued guidelines for congregate settings – staff from the Sheriff’s Office have been monitoring the spread of monkeypox in the U.S. and have been in regular communication with Cermak Health Services, CDPH, and IDPH to prepare for the event that a positive case was identified within the jail. Following the CDC’s protocol, CDPH will be at the jail today to offer education, testing, and vaccination for eligible individuals. The visit is expected to assist the CDC in developing monkeypox protocols for congregate settings. There have been no other suspected cases identified at this time.

We will continue to work closely with our partners to implement current best practices and, as was demonstrated with COVID-19, develop innovative solutions that can serve as a roadmap for other jails and prisons to follow.